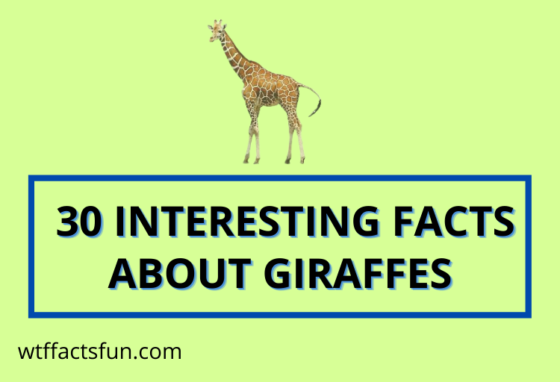 30 Interesting Facts About Giraffes: Hello friends, we are back with 30 mind-blowing facts about Giraffes. They are the tallest mammal living on earth with an average height of 4 meters to 6 meters. Let’s learn some new things about Giraffes.

1. Giraffes learn to stand within half an hour of being born: Yes, it is true. We humans generally take 1 to 2 years to learn walking while Giraffes learn it only in 30 minutes. Not only this, but they also start running after 10 hours.

2. Giraffes stand up most of the time:  Giraffes can sit down but they stand up pretty much all the time because it’s easy for them to escape from predators. This is interesting. Isn’t it? They even sleep and give birth while standing.

5 Giraffes’ tongues are huge in size: Giraffes have massive tongues of size up to 45cm in length so that they can reach the highest trees and can enjoy the tastiest leaves. Giraffes can also clean their ear with the help of their tongues.

6. Dark Blueish tongue of Giraffe: Giraffe has a dark blueish tongue but why do they have a dark Tongue? According to researchers, the Dark tongue is a form of sun protection for the Giraffe.

8. Giraffes have big hearts: Giraffes’ hearts weigh around 11 KG and it is the biggest heart of any animal on land. Its hearts are so powerful that they can pump around 60 litres of blood into the body.

9. Giraffes need help:  Yes, what you have read is true. They need help, either from us or from nature. The population of Giraffes is decreased by 30% in the last 30 years.  There are many reasons why they may become endangered in some years. The main reasons are habitat loss and human-wildlife conflicts. The homes they were living in are turned into farms. The trees are being cut through which they were eating leaves.

10. Giraffes run fast: Giraffes can reach the peak speed of up to 60 Km per hour over short distances. In Latin, they are also called ‘ Giraffe Camelopardalis ‘ which means ‘ one who walks quickly, a camel marked like a leopard.’

13. White giraffe It is the rarest species of Giraffe. In 2020, 2 white giraffes were killed by poachers ( A person who trespasses or steals). According to some reports, only one White Giraffe is alive on earth.  The white appearance of the Giraffe is due to leucism. It is a genetic condition when the skin cells do not have pigmentation.

15. Giraffes live in groups of 10 to 15. They do so because this helps them to survive or fight against predators.

16. Giraffe’s horns are not real The two solid horns of Giraffes are not real. They are actually Ossicones. Ossicone is a form of thick cartilage which is covered with skins. Baby Giraffes are born with flat Ossicones to avoid injury during their birth. Males have thicker Ossicones than females.

17. Gestational Period in Giraffe: Once a male Giraffe mates with a female, the gestations period is around 15 months. When a baby is born, the rough landing breaks the amniotic sac and umbilical cord of the baby Giraffe. It helps and encourages them to start breathing.

20. GCF: Giraffe Conservation Foundation. It is an NGO that aims at the conservation and management of Giraffe. GCF is currently available in 15 countries across the globe.

22. Giraffes helped NASA: In the year 1997, NASA examined the gravity adaptations of Giraffes, especially when they bend down to build more advanced spacesuits for astronauts.

23. Giraffe’s lifespan: Giraffes generally live for 25 years but, they can live up to 40 years in zoos or captivity where they get food and shelter. Also, they don’t have predators in zoos. It’s still better for Giraffes to live outside where they are free.

26. Walking pattern of Giraffe: Unlike horses, Giraffes walk by moving both legs of the same side together. First, they will take the left front and left hind legs step and then the right front and right hind legs step.

27. Powerful Kick: Giraffes have very powerful kicks. A kick can give serious damage to its predator and even kill them. This thing is beneficial for them as it helps Giraffe to attack their predators.

28. Male checks Female’s fertility: Yes! This thing is true. Male Giraffes check the fertility of females by tasting their urine.

30. Giraffes suck bones: We all know that Giraffes are herbivores so how this thing can be possible? Well, this is true. They suck animal bones when they are running out of nutrition and want some extra calcium.

We hope you have liked the post 30 Interesting Facts About Giraffes. You can share this article with your friends and relatives so they can also know fun facts about Giraffes.