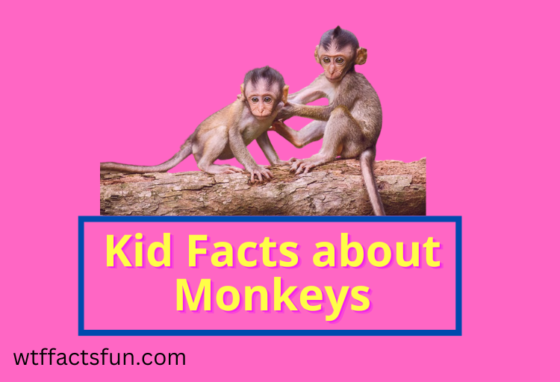 Kid Facts about Monkeys: A monkey is a primate, a mammal that belongs to the order Primates. Monkeys are found in various parts of the world, and there are over 260 species of monkeys. They are known for their intelligence and their ability to use tools and communicate with one another. Monkeys have long arms and fingers, and they are able to grasp objects with their hands and feet. They also have opposable thumbs, which enable them to hold and manipulate objects.

Monkeys are social animals and live in groups called troops. The size of the troop varies depending on the species. Some monkeys are arboreal, meaning they live in trees, while others are terrestrial and live on the ground. They eat a variety of foods including fruits, leaves, insects, and small animals.

Monkeys are considered intelligent animals and are used in many fields of research such as cognitive science, neuroscience, and primate behaviour.

We hope you have liked the article Kid Facts about Monkeys. You can share this post with your friends and relatives so they can also be aware of these Interesting fun facts about monkeys.

20 Best Facts About Peru for Kids