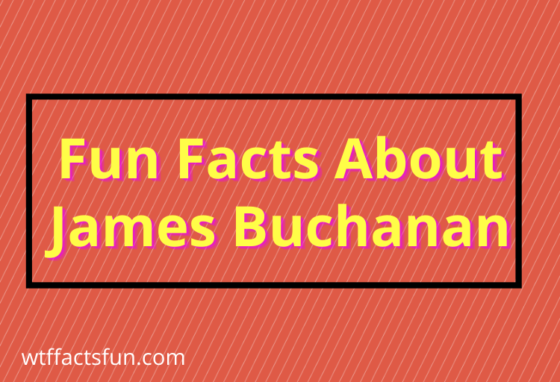 Fun Facts About James Buchanan: James Buchman was the 15th president of the United States. He served the country from 1857 to 1861. Let’s talk some fun facts about Buchman.

1. He was the only president who had been a bachelor his whole life: Buchanan, a 28-year-old attorney who had previously served in the Pennsylvania House of Representatives, was engaged to Ann Coleman in 1819. The relationship wasn’t precisely what you’d expect from a fairy tale. Buchanan’s hectic schedule kept the two apart for long periods of time, and suspicions circulated that he was seeing someone else. Ann was also concerned that her fiancé was more concerned with her father’s wealth than with her.

2. For his views on slavery and abolition, he was dubbed a “DOUGHFACE.” Slavery, in Buchanan’s opinion, would eventually fade away if allowed undisturbed. He was probably opposed to slavery personally, but he believed it was a state-by-state decision that was protected by the Constitution. Because he was a Northerner who followed Southern beliefs, he earned the nickname “doughface” for his fence-straddling ideas.

3. Buchanan’s contemporaries were impressed by his capacity to eat massive amounts of wine and whiskey, according to historian Mark Will-Weber. He once drank 16 toasts. College in 1808. he would buy 10-gallon casks of whiskey from distiller Jacob Baer on Sundays.

4. Fought in the war of 1812: Buchanan started his career as a lawyer, but he decided to join a company of dragoons to fight in the War of 1812.

5. Raid of John brown Abolitionist: John Brown led an army of eighteen men on a raid to seize the armoury in Harper’s Ferry, Virginia, in October 1859. Buchanan dispatched the US Marines and Robert E. Lee to hunt down the raiders who had been apprehended. For murder, treachery, and plotting with enslaved people, Brown was hung.

6. Buchman supported the Lecompton constitution: The Kansas-Nebraska Act allowed Kansas Territory people to choose whether they wanted to be a free or pro-slavery state. Many different constitutions have been proposed. Buchanan was a strong supporter of the Lecompton Constitution, which would have legalised slavery. Congress was unable to reach an agreement, therefore it was returned to Kansas for a general vote. It was a resounding defeat. The Democratic Party was split between northerners and southerners as a result of this event.

7. Believed in the Right to Self-Determination Seven states seceded from the Union when Abraham Lincoln won the presidential election in 1860, forming the Confederate States of America. These states, according to Buchanan, were within their rights, and the federal government had no right to force them to remain in the union. He also tried to avoid war in a variety of ways. He established a deal with Florida that no further federal troops would be stationed at Fort Pickens in Pensacola unless Confederate troops attacked it. He also overlooked violent measures against ships transporting troops to Fort Sumter off the coast of South Carolina.

8. In 1856, he ran for President as a compromise candidate. Buchanan‘s ambition was to become President of the United States. He was listed as one of several potential Democratic candidates in 1856. As Bleeding Kansas demonstrated, there was an era of great turmoil in America over the introduction of slavery to free states and territories. Buchanan was chosen over the other contenders because he had been away for much of the turbulence as the British minister, allowing him to be removed from the issues at hand. Because Millard Fillmore split the Republican support, Buchanan won with 45 per cent of the popular vote.

9. Andrew Jackson’s supporter Following the War of 1812, Buchanan was elected to the Pennsylvania House of Representatives. After spending one term, he was not re-elected and returned to his law practice. He was a fervent supporter of Andrew Jackson and spoke out against the ‘corrupt agreement’ that saw John Quincy Adams win the 1824 election over Jackson.

10. He was the key diplomat A number of presidents saw Buchanan as a vital diplomat. In 1831, Jackson honoured Buchanan’s service by appointing him as minister to Russia. In 1845, James K. Polk appointed him Secretary of State. He negotiated the Oregon Treaty with Great Britain in this capacity. He was a part of the secret Ostend Manifesto’s formulation.

Hey friends, that’s it for today. I hope you liked the post Fun Facts About James Buchanan and gained a lot of knowledge from it.

16 Best Facts About Stars For Kids

16 Fun Facts About Bumblebees You Need to Know