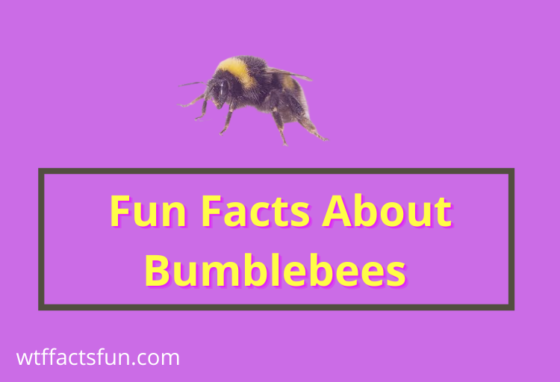 Fun Facts About Bumblebees: The bumblebee is a very small insect but it has many things that you do not know. We are back with some fun facts about bumblebees that will give you more knowledge about bumblebees. Let’s learn something!

4. Bumble bees survive after stinging: If you were thinking that all types of bees die after stinging then, you are wrong. Bumblebees don’t die after they sting somebody. In fact, bumblebees can sting a person several times nonstop if they are threatening them or they feel unsafe in their presence.

5. Some people are allergic to bee stings: According to studies, 1 out of 100 people on the earth are allergic to bee stings which are 1% of the total population. Some reactions are minor like itching or redness which do not require treatment though. Some reactions are very harmful like fainting and hence, it requires emergency treatment from a doctor. If this situation occurs then, you must call an ambulance immediately and go to a nearby hospital.

6. Bumblebees have fast metabolism: Bumblebees eat so much. The reason behind this is their fast metabolism. Even if their stomach is full, they will go on starving within 40 minutes. What do you think, Is that good or bad?

9. Bumble Bees have oily and smelly feet: Bees have smelly feet like many insects which are covered with a different kind of chemical or oil. When they finish collecting nectar from flowers, they leave their chemicals behind. It works as a sign for other bees not to land on that flower because nectar is already collected. They also leave the chemical when they enter the nest for the first time. It helps them to find their way back to their home.

10. How do scientists collect DNA samples from bees?: To collect the DNA sample of bees, scientists cut off their toes. It sounds cruel, right? But it’s not that cruel because this process doesn’t impact either their ability to accumulate food or their life span.

13. Bee sperm lives for months inside the queen bee: Queen bee mates with the male bee in summer and then, stores the sperm for a year. She survives the winter and then becomes ready to fertilize eggs after finding the place to make the colony. By the end of the summer when the queen is more than a year old, she dies along with worker bees and her daughter replaces her.

15. World’s largest Bumblebee is known as Bombus Dahlomi and it lives in South American temperate forests. It is 40 mm long. According to scientists and many people, it looks like ‘ Flying mice. ‘

16. Bumblebees are in danger: Unfortunately, this thing is true. Many species of Bumblebees are declining very fast. It is a very serious problem for our ecosystem. There are many bees like ‘ Franklin’s Bumblebee ‘ which is listed as endangered.

Why it is the serious problem? You might be thinking that how it affects us, humans! Right? Well, it’s the problem for the entire ecosystem. Bees are the main pollinators who pollinate approximately 75% of crops. If the bees go extinct, it will badly affect our food options. That’s all, I hope this post will increase your knowledge about bees and your perspective about bees will turn from negative to positive. I hope that you understood the importance of bumblebees to our environment.

What do Bumblebees do ?

They pollinate plants and crops.

How can you tell whether Bumblebee is male or female ?

By looking at the legs.

What is the Bumble bee’s favourite flower ?

How long does a queen bumblebee live?

We hope you have liked the post Fun Facts About Bumblebees. You can share this post with your friends and relatives so they can also aware with bumblebees facts.