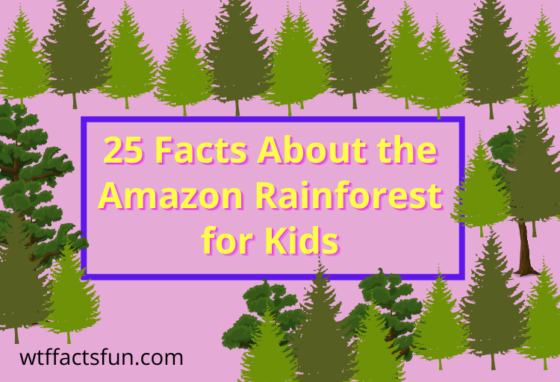 Facts About the Amazon Rainforest for Kids

2. The Amazon rainforest is so large that it actually makes up more than half of the remaining rainforest land in the entire world. It’s so big that it’s almost the size of the continental United States. Now that’s big.

3. When a Spanish conquistador named Francisco de Oriana battled native tribes for their rainforest land in 1542, he was surprised to see women fighting alongside the men. He called the rainforest the Amazon after a group of large, fierce warrior women from Greek mythology who went by the same name. Oh, and if you happen to be looking for a cool superhero name, the forest is also known as Amazonia.

4. There are many tribes of indigenous people who still live in the Amazon rainforest today. Almost all of the tribes have their own culture, language, rules, and territory. Several of the tribes have no contact with the outside world and no experience with modern technology.

5. In fact, the Amazon region is actually home to more than 30 million people. Most of the land is divided into separate territories belonging to nine different countries. Brazil, Colombia, Peru, Venezuela, Ecuador, Bolivia, Guyana, Surinam, and French Guiana.

6. The Amazon rainforest’s unique climate creates incredibly unique biodiversity, so the area’s human residents have some pretty interesting neighbours. One-tenth of all known plant and animal species on the entire planet lives in the Amazon rainforest. It’s the single most diverse collection of species on earth. In fact, the collection is actually still growing as scientists discover even more new species every year.

7. The Amazon rainforest is packed with animals that want to eat you, poison you, or really really just ruin your day. This includes anacondas, alligators, and monkeys. electric eels Piranhas are poison dart frogs, bull sharks, vipers, boas, spiders, bats, ants, and all sorts of other deadly creatures.

8. Even the birds in the Amazon can be deadly. The Amazon is home to one-fifth of all known bird species on earth and some are pretty aggressive. The harpy eagle is one of the toughest birds on the list. These large predators can grow over three feet tall with a six-foot wingspan and they feed on mammals of all different sizes.

9. Macaws are also native to the Amazon rainforest, and luckily they’re a bit more friendly. These birds are famous for their beautiful feathers. Their tongues also have a thick bone that helps them crack nutshells. They’re also remarkably good at mimicking human speech.

10. The toucan has become a symbol for the Amazon rainforest even though they mostly stay hidden high up in the canopy layer. Their brightly coloured bills can be over half the length of their bodies, but don’t worry, they’re very light and easy to manoeuvre. These bills help the two reach fruit from high branches and bugs that are burrowed deep inside of trees.

11. There are so many insects in the Amazon rainforest that it’s impossible to get an accurate count of how many different species there are right now. The best estimate of experts is about 30 million. One acre of forest may have almost 70 000 different species of insects.

12. One of the weirdest-looking insects from the Amazon rainforest is the peanut-headed lanternfly. The unique shape of their heads is supposed to mimic the head of a lizard or snake to scare off predators. If that fails, they have big fake eyeballs on their wings when threatened. They also release a foul-smelling substance that helps them escape.

13. There are about 20 000 known species of butterflies in the world, and a whopping 7 000 of those species are found in the Amazon. Some of them are gorgeous hues of blue, red, black, green, yellow, and well, every colour there is, and others are masters of disguise, mimicking the patterns of fallen leaves.

14. The Amazon is also home to tons of different species of frogs and toads. The air is so humid and it rains so often in the Amazon that these amphibians don’t have to live by bodies of water like in other parts of the world. Instead, they’ll climb trees to explore and escape predators, but actually, a lot of the species don’t really have to worry about predators at all because they’re so poisonous.

15. The Amazon rainforest is also chock full of monkeys. There are many different species that range in size and level of intelligence. Most of them eat fruit and nuts, but some eat birds’ eggs and even birds themselves. The howler monkeys that live in the Amazon rainforest are the loudest land animals in the entire world. Their territorial call can be heard from over three miles away.

16. Three-toed sloths are some of the most popular animals that come from the Amazon rainforest. They’re super cute but also super lazy, so lazy in fact that algae actually grows on their fur. They sleep up to 20 hours a day, and even when they’re awake, they don’t do much except hang around in trees. They have a few hidden talents, though. They can rotate their heads almost all the way around, and when they fall into the water, they’re actually pretty strong swimmers.

17. The Amazon basin is home to the majestic pink dolphin, These large freshwater dolphins can grow over eight feet long and usually swim around alone. In Amazonian folklore, these dolphins are said to be shapeshifters. It’s considered bad luck to kill a pink dolphin, and if you look into a dolphin’s eyes you may have lifelong nightmares.

18. There are a lot of trees in the rainforest. Like a lot. There are almost 1600 different species of trees in the Amazon, and they combine to create a dense forest of about 390 billion trees. These trees create natural materials and provide homes for most of the insects, birds, and animals of the Amazon.

19. Many rainforest plants have developed special natural defence systems so that animals won’t eat them. Some plants have hard outer layers which make them hard for animals to break down and eat. Some have become tasteless or super bitter. Some of the plants have even developed poison to protect themselves.

20. The Amazon rainforest is home to over 3,000 different kinds of fruit, of which only around 200 are commonly used in the western world, like avocados. Coconut, figs, orange, lemonade, grapefruit, bananas, guavas, pineapples, mangoes, and tomatoes.

21. Trust me, the Amazon rainforest isn’t called a rainforest for no good reason. It creates almost 50% of its own precipitation because of the dense trees that keep the moisture in. It can see anywhere between 80 and 430 inches of rain throughout the year, but that being said, it does still see long dry periods that can cause droughts and do damage to some of the wildlife.

22. The canopy layer, aka the layer where the leaves and branches of dense trees interweave, can be composed of almost a hundred feet of vegetation. This covering of leaves is so thick that it leaves a lot of the forest floor so dark that most plants can’t grow on the ground. Sometimes it can take 10 full minutes for the rain to pass through the canopy layer.

23. The four main layers of the Amazon are the emergent layer, the canopy layer, the understory layer, and the forest floor. The emergent layer is the highest level of the rainforest. The giant trees have huge mushroom-shaped crowns that cover everything below.

Since it’s the layer that touches the sky, it gets by far the most sunlight but also endures high temperatures, low humidity, and strong winds. It’s also the world’s biggest natural avian. The understory layer receives only 2 to 15 per cent of the sunlight that falls on the canopy layer above because of this the understory is a dark almost impenetrable layer full of vines shrubs and small trees this layer creates natural camouflage for the animals that live there the bottom layer is the forest floor only two per cent of the sunlight makes it through the other three layers so it’s extremely dark year-round the quality of soil is very poor so the floor is mostly a thin layer of fallen leaves seeds fruits and branches that decompose quickly due to the warmth and moisture.

24. The trees in the Amazon produce more than 20 % of the world’s oxygen. The Amazon rainforest is affectionately known as the “lungs of the world.”

25. The Amazon rainforest has fallen victim to deforestation, which means that as we chop down trees for materials and space for crops, we do severe damage to the Amazon’s fragile ecosystem. Over 750000 square kilometres of the forest have already been lost. Many species of insects have been entirely wiped out before they could even be studied.

We hope you have liked the post Facts About the Amazon Rainforest for Kids. You can share this post with your friends and relatives so they can also know these amazing facts about the Amazon rainforest.

10 Fun Facts About the Solar System for Kids