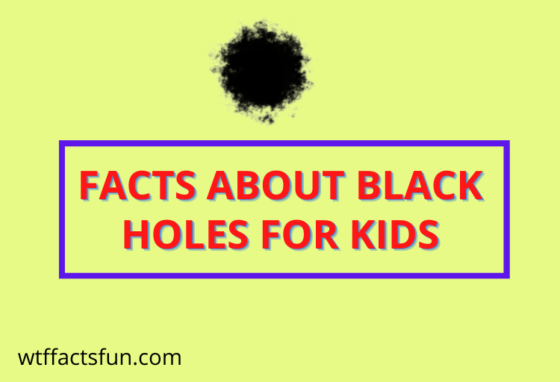 Facts About Black Holes for Kids

Facts About Black Holes for Kids: A black hole is a region of space that pulls everything in but prevents anything from escaping even light. The reason it’s called a black hole is that it sucks up all the light that hits its border and reflects nothing.

A black hole has a defined surface known as the event horizon. This marks the point of no return little is known about black holes but several scientists in history have developed their own theories about their properties and structures. Here’s a list of 25 crazy facts about black holes.

1. Just as a clock one’s a bit slower closer to sea level than up on a space station clocks one really slow near black holes it all has to do with gravity.

2. While not all scientists agree there are several who believe that they can be infinitely big.

3. Our galaxy is covered in black holes but the one most likely to destroy our measly planet is still well beyond our solar system’s borders.

4. The event horizon as it’s called in physics is the border of the black hole it’s the point of no return before that point you can still escape after that point no chance.

5. There’s a massive black hole at the centre of the Milky Way galaxy it’s 30,000 light years away and is over 30 million times as massive as our Sun.

6. While common knowledge states that nothing can escape a black hole at least one thing does radiation according to some scientists as the black holes emit radiation they lose mass this process has the potential to eventually kill the black hole.

7. Black holes are not infinitely small at some point the collapsing core of a black hole will be even smaller than an atom or an electron. It eventually reaches its Planck length a quantum size limit that makes it barely measurable.

8. In most textbooks you’ll probably see black holes that look like funnels this is because they’re being Illustrated from the perspective of gravity wells in reality they’re more like spheres.

10. Black holes have the capacity to distort space itself and as they continue to spin that distortion gets just as distorted it’s an infinite regression of distortions.

11. Although it seems obvious that a black hole is incompatible with life most people think they would just get crushed this isn’t necessarily the case whatever part of your body reached the event horizon first would experience significantly more gravity stretching your body until you die.

12. Although they’re known for their blackness as I said earlier they actually do emit electromagnetic radiation.

13. Of course in most circumstances they probably would be destructive there have been numerous theories studies and suggestions put forth that black holes can actually be harnessed for things like power and space travel.

14. Although I just talked about how small they are black holes expand as they collide with other black holes allowing their size to increase with every collision.

16. It was not Albert Einstein that discovered black holes Einstein revived the theory of black holes in 1916 long before that in 1783 a scientist named John Mitchell actually developed the theory after he wondered whether a gravitational force could be so strong that even light particles couldn’t escape it.

17. To have enough gravity to pull even light into itself a black hole has to contain an incredible amount of mass in a tiny space this means that black holes must have a mass of about 10 to 30 billion times the mass of the Sun.

18. Although the vacuum of space doesn’t really allow for sound waves if you listened with special instruments you would hear a static-like sound when a black hole pulls something in its event horizon and supercharges the speed of particles close to the speed of light which produces the sound.

19. Nothing can escape the pull of a black hole ok that sounds obvious by this point but I’d like to introduce the caveat unless it can move faster than the speed of light.

20. Researchers say the black hole creates elements as they break down matter into subatomic particles these particles have the ability to create elements heavier than helium such as iron and carbon as well as many others that are essential to the formation of life.

21. Black holes are best known for sucking up everything that gets near their event horizons once a mass gets into a black hole it gets squashed so hard that its individual components become compressed and eventually break down into subatomic particles. Some scientists theorised that the matter is then ejected in a phenomenon known as a white hole.

22. Technically speaking stars aren’t the only things that can become black holes if your car keys were shrunk down to an infinitesimally small point and still retained all of their mass their density would reach astronomical levels. It would make the force of their gravity ridiculously strong.

23. According to theories matter with whom black hole is crushed to infinite density and space and time exist when this happens the laws of physics break down because it’s not really humanly possible to conceive of anything with zero volume and infinite density.

24. Contrary to the popular belief that there is a tunnel in the middle of every black hole all that exists at the centre of a black hole is a massive amount of matter compressed infinitely.

25. One according to some scientists the number of stars in the universe is limited by the number of black holes this is due to the way they affect gas clouds and element formation within the parts of the universe known to produce new stars.

10 Fun Facts About the Solar System for Kids