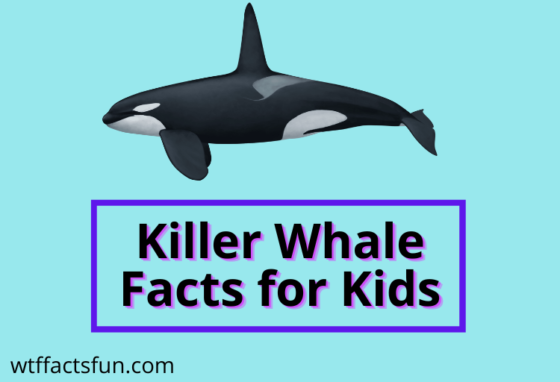 Killer Whale Facts for Kids: Hello friends, In this article we are going to share with you killer whale facts for kids. Orca is known as the killer whale. An Orca killer whale is an animal that is very intelligent. In fact, they have the second heaviest brain among all marine mammals.

1 An orca isn’t a whale. Orcas are actually dolphins.

2. In fact, Orca’s name was “killer whale” because ancient sailors, a long time ago, saw them hunting in groups to take down another whale, then the term somehow got flipped around over time.

3. Orcas are carnivores, which means they are meat-eaters, and they will eat and hunt anything from fish to walruses to seals. Sea lions, penguins, seabirds, squid rays, sea turtles, even other kinds of whales are on the menu.

4. They are apex predators meaning that they are at the top of the oceanic food chain and have no natural predators.

5. Orcas have even been known to hunt and eat shark meat lacking any natural predators of their own these marine mammals are able to freely hunt other oceanic creatures without the fear of being hunted themselves.

6. Orcas have been called wolves of the sea because they live and hunt together in pods or family groups just like a pack of wolves. These megamarine mammals have many hunting techniques. A pod of orcas will work together to circle their prey and force them into smaller areas before attacking.

They’ll also slap the water with their tails until the water’s surface, causing a wave to splash their prey, such as a penguin or sea lion, off the ice.

7. Wherever they are in the world’s oceans, the average-sized orca eats about 500 pounds of food a day. That is a lot.

8. Orca killer whales live in all the oceans of the world. Orcas are the most widespread mammal in the animal kingdom after humans. The species ranges from the arctic to the antarctic and can be found everywhere from the freezing waters of the north and south to the warm waters along the equator, including the Hawaiian islands, the Galapagos islands, and the Gulf of California.

Orcas have been seen in all the world’s oceans, but they have also been spotted in freshwater rivers.

9. Female orcas give birth every three to ten years, and for most orcas, their children stay by their side all of their lives. Orcas stay pregnant for about 17 months. That is a long time.

10. When the babies are born, they are carefully protected by the whole pod, or family group. Baby orcas, also known as calves, are able to swim and dive right at birth, and they grow quickly on their mother’s milk. Calves drink their mother’s milk for about a year before they try other foods from the sea.

11. Newborn calves are huge when they are born. They are like seven to eight feet long, which is taller than me and weigh about 300 to 400 pounds, which is as heavy as a motorcycle.

12. A full-grown orca can reach as high as 20 to 26 feet and can weigh up to 12,000 pounds. That’s longer than a huge minivan and weighs as much as three minivans put together.

13. Orca killer whales have the second largest brains of any marine mammal, second only to the sperm whale. The orca’s brain can weigh up to 15 pounds. Some scientists use brain size, specifically the ratio between brain weight and body weight, to roughly measure intelligence. By that measure, the orca’s brain is two and a half times larger than the average brain of other animals.

However, because orcas have such impressive social language and echolocation abilities, it’s believed that they are even more intelligent than their brain size suggests.

14. Orca whales use echolocation as a means of determining the location of things. But also to communicate. The reverberating sound the orca puts out gives them information about the object’s location, size, and shape.

Orcas have tons of different sounds for communicating, socializing, and finding prey. These sounds include clips, squawks, post-calls, and whistles.

15. Each pod or family group has a distinctive sound that they use to communicate among the family only. So basically, different populations of orcas speak different languages, so if a pod that’s in the pacific northwest spoke to another pod from Ireland, they wouldn’t be able to understand each other.

16. Orca killer whales in the wild can live anywhere from 60 to 100 years old in captivity, which means jail for an animal. They live until about 14 years old in places like Seaworld.

17. In the wild, orcas swim 140 miles per day. That’s impossible in captivity. In captivity, these animals become depressed, sad, angry, anxious, and go crazy because these are awful living situations that they’re put in.

18. In the wild, orcas have strong family bonds that last a lifetime. Their social rules don’t really allow for serious violence against one another, and if a fight happens, they have the space of the ocean to swim away. In captivity, there is nowhere for them to go, and this leads to painful injuries and death.

Final words: We hope you have liked the post killer whale facts for kids. You can share this facts with your friends and relatives so they can also know these interesting facts about killer whale.