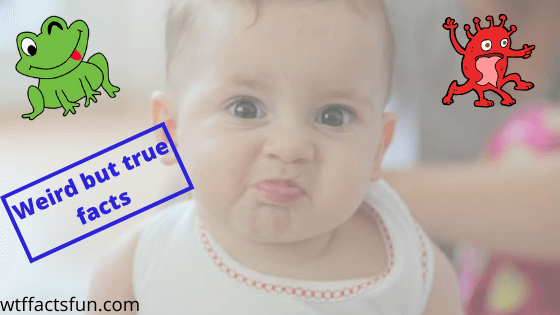 Weird but true facts about animals:

4. Rhinos may communicate by leaving each other dung piles.

5. Some ants can make themselves explode when they are scared. The bomber bug can shoot hot venom from its rear end. Ladybugs squirt smelly liquid from their knees. So try not to scare any bugs.

Weird but true facts for kids:

7. Some people taste-test pet food for a living.

8. Scientists have found a new monkey species with a blue butt.

9. A machine was invented to turn sweat into drinking water

11. Human has has a billion bacteria in its mouth. Swallows a quart of mucus every day.

13. Cockroaches can recognize their family members.

15. It once rained worms in a city in Louisiana.

17. Cows can drink a bathtub full of water in a day.

18. Some dogs are allergic to cats.

What is the most interesting fact?

The most traveled country in the world is France.

What is the weirdest fact ever?

The tomato sauce was sold like a medicine in 1800.

What is the craziest state?

Florida because skateboarding is illegal without a license there.