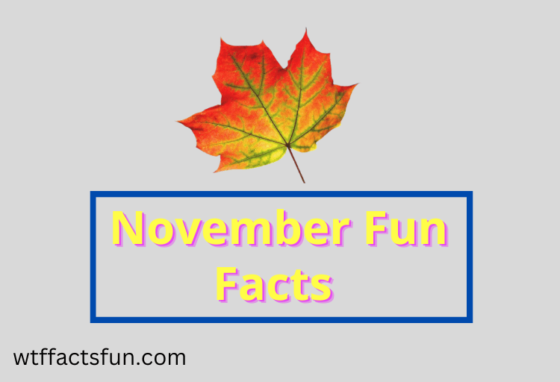 November Fun Facts: November is the eleventh month of the year in the Gregorian calendar and has 30 days. It is the second to last month of the calendar year and is considered a month of transition as it marks the end of autumn and the start of winter in the Northern Hemisphere. The name November comes from the Latin “novem” meaning “nine,” as November was the ninth month in the Roman calendar.

In the United States, November is known for several important holidays and observances. Veterans Day is observed on November 11th and honours the service of military veterans. Thanksgiving Day, a national holiday, is celebrated on the fourth Thursday of November and is a day for families to gather and give thanks for their blessings. Black Friday, the day after Thanksgiving, is traditionally the start of the Christmas shopping season and is known for its big sales and discounts.

We hope you liked the post on November fun facts. You can share this post with your friends and family so they can also learn these interesting facts.

20 Best Facts About Peru for Kids