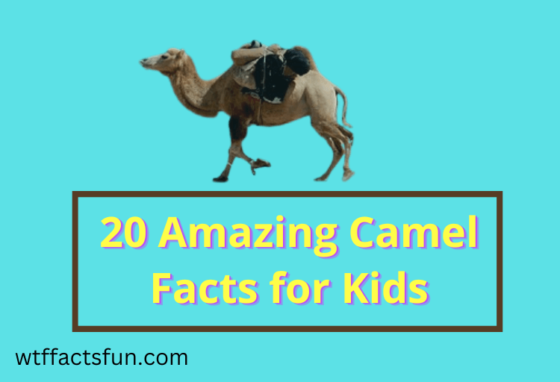 20 Amazing Camel Facts for Kids: Large animals with one or two humps on their backs are called camels. Camels have been domesticated for a very long time and are used as livestock to provide milk, meat, and fibre. Camels are important modes of transportation for both people and goods since they are working animals that are well suited to their desert habitat. Here is a collection of 20 astonishingly fascinating camel facts for kids that you may not have known.

Three camel species are still in existence. 94% of camels on the planet are one-humped dromedaries, while 6% are two-humped Bactrian camels. A distinct species that are currently at grave risk of extinction is the wild Bactrian camel.

The ancestor of modern camels, Paracamelus, migrated across the Bering land bridge into Asia during the late Miocene, some 6 million years ago. Camelids first appeared in North America during the Eocene.

Dromedary camels reach maximum heights of 2.15 m at the hump and 1.85 m at the shoulder.

Camels can run up to a speed of 40 miles per hour.

Camels’ humps are actually fatty tissue reservoirs rather than actual places where water is kept. For every gramme of digested fat, this tissue produces more than one gramme of water during metabolism. As a result of this fat metabolism, which releases energy, water from the lungs evaporates as you breathe.

The huge, even-toed Bactrian camel, also known as the Mongolian camel or domestic Bactrian camel, is a creature of the Central Asian steppes. In contrast to the dromedary with a single hump, it has two.

The critically endangered wild Bactrian camel is found in regions of northwest China and southwest Mongolia. It shares a close kinship with the Bactrian camel. Both animals are native to the steppes of central Asia and are big, double-humped, even-toed ungulates.

Even in extremely hot weather, the dromedary camel may go up to ten days without drinking and can dehydrate to the point of losing up to 30% of its body weight.

Red blood cells in camels are oval-shaped rather than round. A 600 kg camel can drink 200 L of water in three minutes. This improves the flow of red blood cells during dehydration and makes them better at withstanding significant osmotic fluctuation without rupturing while drinking huge volumes of water.

Changes in body temperature and water consumption that would kill most other mammals are not fatal to camels. Their average temperature is 34 °C in the morning and rises steadily to 40 °C by sunset before cooling off at night.

The broad legs of the camel keep its body away from the hot earth, which can reach temperatures of 70 °C. Over their sternum, dromedaries have a thick tissue pad called the pedestal. The pedestal elevates the body off the scorching surface when the animal is lying sternally recumbent, allowing cool air to circulate underneath. The camels walk without sinking into the sand thanks to their gait and their wider feet.

Camels can chew prickly desert vegetation because of the thick, leathery lining in their jaws. The ability to seal one’s nostrils and have long eyelashes and ear hairs create a defence against the sand. They have a translucent third eyelid that they can use to remove sand from their eyes.

A camel’s kidneys and intestines are excellent at reuse water. The cortex-to-medulla ratio in camel kidneys is 1:4. As a result, the medullary portion of a camel’s kidney is twice as large as that of a cow. Second, the surface area for filtration is reduced by the lower diameter of renal corpuscles. Due to their two main anatomical features, camels may survive in harsh desert environments by conserving water and urinating only a small amount.

Other mammals’ immune systems are different from the camel’s. Antibody molecules with a Y shape typically have two heavy chains along the length of the Y and two light chains at each point. In addition to this, antibodies in camels are smaller and more robust due to the fact that they only contain two heavy chains.

Similar to horses, camels were first domesticated in North America and then moved across the Bering Strait to Asia. They persisted in the Old World, where they were eventually tamed and dispersed by humans throughout the world. The original wild camels in North America were exterminated along with many other megafauna species during the migration of the first indigenous peoples of the Americas from Asia into North America, between 10,000 and 12,000 years ago; however, fossils have never been directly linked to evidence of hunting. The majority of living camels are domesticated.

Camel’s hair is used by Mongolian nomads and desert tribes for clothing, bedding, ornaments, tents, and yurts. Camels have soft inner down and outer guard hairs, and the fibres are classified based on the animal’s colour and age. The softer hair is utilised for high-end items, while the guard hairs can be felted to be used as waterproof coats for the herdsmen. The fibre can be spun into yarn for hand knitting or crocheting or used in weaving.

In conflicts across Africa, the Middle East, and even in the contemporary Border Security Force of India, military forces have employed camel cavalries. The Battle of Qarqar in 853 BC saw the first recorded usage of camel cavalries. Additionally, camels have been utilised by armies in place of horses and mules for transport.

A nomad may survive only on camel milk for over a month; it is the main food of Sahara nomad communities and is occasionally considered a meal in and of itself. Yoghurt can be easily manufactured from camel milk, but making butter from it requires first souring it, spinning it, and then applying a clarifying agent.

They give out food, such as milk and meat. Worldwide, thirty-three lakh camels and other camelids are killed for their meat each year. A large amount of meat can be obtained from a camel carcass. Male dromedary carcasses can weigh up to four hundred kg.

Final words: We hope you liked our post on “20 Amazing Camel Facts for Kids.” You can share this post with your friends and relatives so they can also know these interesting camel facts.

Top 15 Facts About Amphibians for Kids