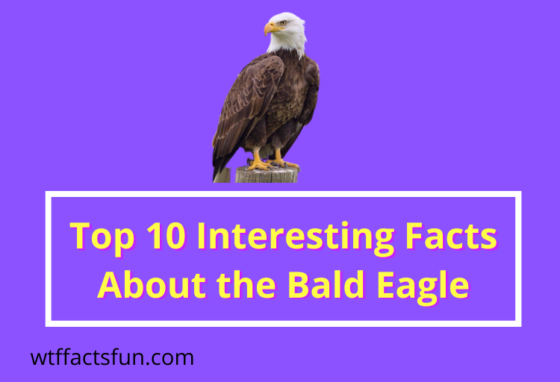 Interesting Facts About the Bald Eagle

1. A bald eagle can catch their own food with no problem, but why go to all that work when it’s easier to steal food Bald eagles are known for chasing down other birds that have caught fish and continually chasing them until they give up their catch to the eagle. They’re also known for eating all sorts of garbage out of dumpsters Yeah, I’m not sure those Clif Bar wrappers will feel good coming out.

2. Bald eagles mate for life. All the eagles are usually counted as pairs. They’re a lot like a human family in this aspect. They build a nest together, share the work of incubating Eagle eggs, and take turns feeding the babies. Bald eagles usually find a mate at the age of four or five, and they’re together their whole lives.

3. Female bald eagles are physically larger than males, which is unusual considering the large majority of animals in the wild sport the larger dominant male. Scientists can’t figure out why. A few speculations are that females take charge of nesting duties and being larger may help them be more dominant. It could also be just for the simple fact that the mother eagle will stay and protect her baby eagles and needs a more intimidating presence.

4. Bald eagles have a wider field of view and sharper vision than humans. They can also see ultraviolet light. The bald eagle has two pairs of eyelids; one normal pair like humans have and a second one called a nictitating membrane, which is a see-through eyelid that keeps the eyes moist, which is kind of needed when you’re flying around all day.

5. Bald eagles are predominantly found in North America and Canada, with some populations in Mexico. There are other species that are similar to the bald eagle that exists elsewhere, but none that are the same as the bald eagle.

6. Bald eagles don’t make the sounds you hear on TV or in the movies; they make not-so-powerful chirps and beeps, which get dubbed over for the powerful screech you’re used to hearing in movies.

Once an eagle locks on to their prey, it can’t unlock its talons until they get to shore where it can stand up. For this reason, if the fish is too big for the Eagle to handle, the fish can potentially drown the Eagle. Talk about picking your prey.

8. The bald eagle was almost wiped out in the United States when European settlers showed up and started setting up settlements. An Act was passed in 1940 to protect them, but bald eagles were further wiped out when an insecticide called DDT, known as that stuff has been linked to numerous types of cancer, was introduced to farmland in the United States.

The number of eagle pens dropped to 471, at which point DDT was banned in 1970. Since the ban on DDT, there’s been a massive recovery for the bald eagle. Today there are over 9700 eco-paired in the United States.

9. They live long lives. The longest-living bald eagle died last year at the age of 38. Now despite what you might think based on what you’ve seen in the past year, those articles going around about eagles living to age 90, yeah that simply isn’t true.

10. They perform an aerial dance. Bald eagle pairs have been found to lock their feet in the air while diving, putting them into a downward spiral. They hold on as long as possible before hitting the ground. Scientists aren’t sure why they do this, but the same thing could be said for things that humans do.

Final words: We hope you have liked the post Interesting facts about the bald eagle. You can share this post with your friends and relatives so they can also know these facts.