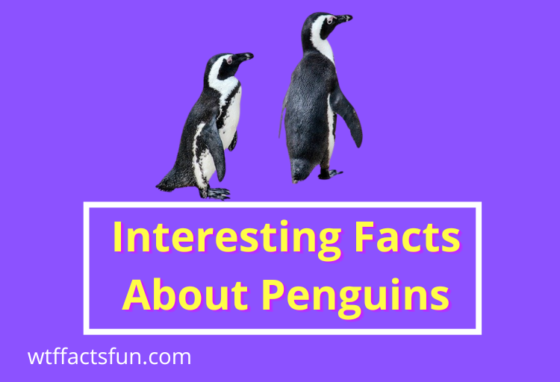 Interesting Facts About Penguins: The only list of penguins you will ever need Penguins are the type of animals that instantly put you in a good mood when you see them waddling along or watching them swallow fish like it’s their last meal. There are 17 species of penguin, and today we’re going to discuss some of these remarkable animals.

1. The penguin with white flippers. This penguin is very cute, reaching only twelve inches (or thirty centimetres). They weigh a mere three pounds each. They earned their name from the white markings on their flippers, and currently, there are only 3,700 breeding pairs. They’re found exclusively on the Banks Peninsula in New Zealand and feast on small shoaling fish like pilchards and anchovies.

2. Penguins tend to swallow a lot of water, which makes sense considering they spend half of their lives in the ocean, and thanks to a special gland behind their eyes called the supraorbital gland, they’re able to filter out saltwater from their bloodstream. They then excrete it through their beaks or expel it with a great big sneeze.

3. Jotham Island Little Penguin-this is another very small special kind of penguin, reaching heights between 13 and 17 inches. It can vary slightly depending on the subspecies. They’re native to the shorelines of southern Australia and New Zealand and some have been spotted in Chile. They’re also known as fairy penguins due to their size and weight in the region of just two pounds. They have other names too, including the Maori name of Cora and Little Blues due to their indigo blue and grey feathers. Besides their diet of small fish, they also eat crab larvae, seahorses and crustaceans.

4. It’s catastrophic but not in the way we’re familiar with. Unlike most birds, penguins don’t just lose a few feathers at a time; they lose everything at once for about two or three weeks while they undergo the catastrophic moult. The old feathers don’t fall out until all the new feathers are present, making for rather awkward-looking penguins.

5. This little chap is a type of little penguin and inhabits the southern end of the northern island of New Zealand. Penguins are so important that there is a world penguin day on the 25th of April.

6. From the top, penguins’ black bodies blend into the ocean waters, making them very difficult to see. From the bottom, their white stomachs are hidden against the bright surface reflecting into the water.

7. African penguins are the only species of penguins native to Africa and you’ll find them in South Africa and Namibia. There are many rehabilitation centres where on certain days of the year the public can go watch the penguins being released back into the ocean. They use their calls to identify each other, ask for food, and find a mate Bartholomew Diaz was the first European to spot an African penguin. The penguins, unfortunately, became food for him and his crew. Fortunately, that is no longer the case. There are 21,000 breeding pairs of African penguins remaining.

8. Some species of penguins do things the other way round. The male penguin will sit and incubate the eggs while the females leave for weeks at a time to go and hunt. Females find pudgy ER penguins much more attractive because they know that they have enough fat storage to last a few weeks without eating.

9. Northern Rockhopper penguin: These penguins are native to Tristan da Cunha and Goa and despite these little islands being uninhabited, they have little fear of humans. These penguins are endangered and their population has declined by 90% over the past 70 years. They eat krill crustaceans, squid fish and octopus.

10. You would be surprised to hear that even though you can’t see the visible ears of a penguin, their hearing is excellent and they can easily pick up their mate’s distinct call in crowded breeding grounds.

11. Antonio Pigafetta gave the first published account of a penguin spotting in 1520 when he was aboard Ferdinand Magellan’s circumnavigation of the globe he saw them in Argentina and described them as strange geese.

12. Probably one of the most recognizable penguins is the king penguin. They are found in frozen and cold places and are especially prevalent in the Falkland Islands. They are exquisitely beautiful when they’re adults, but we can’t say the same for their fuzzy brown babies. They’re the second largest of the penguin species and have a diet consisting of mainly lantern fish, squid, and krill. King penguins will dive as deep as 300 feet to catch prey and some have recorded depths of up to 1000 feet. Fos of the earliest relative of the king penguin has been found dating back 60 million years.

13. Yellow-eyed penguin: No surprise is how this penguin got his name and they are native to New Zealand’s South Island. They are called a coil, which is Maori for noise shouter, and yes they are really noisy penguins. There are less than 3400 remaining and their conservation status is threatened. Their biggest threats include dogs, human predation, disease, and habitat loss.

14. Snug and warm-most sea mammals have a lever which helps to keep them warm, but not penguins. Their feathers trap a layer of warm air next to the skin, which insulates the penguin, which then heats up even more when they start to generate muscular heat during swimming.

15. When it comes to cuteness, these guys are top of the list. They are adorable and it may surprise you to know that they are some of the fiercest hunters. Sadly, due to climate change, their food source is at a minimum. They got their pretty name from the French and arctic explorer Jules Dumont d’Urville, who came upon these penguins in 1840. He named them after his wife Adele. They’re also known as brush-tailed penguins and they’re dynamite in small packages, having been known to take down much larger predators like seals and massive sea births.

16. Penguins do not expel gas Humans release 1000 metric tons of carbon dioxide into the atmosphere daily thanks to you know, exhaling gas, but penguins are nothing. In fact, if you have a penguin that’s farting, better get him checked out. Penguins don’t eat high fibre diets, so their guts are filled with completely different bacteria that do not produce gases.

17. Chinstrap penguin: These penguins are native to the shores of Antarctica and several Pacific and Southern Ocean islands No guesses as to why they’re called chinstrap penguins because they do look like they’re wearing little army helmets. It’s nice to know that there are so many of them and they’re not on the endangered list. With around 13 million individuals waddling around, they leave their breeding colonies in the fall and migrate north until the following spring. They are roughly 28 inches tall and weigh between nine and fourteen pounds. They eat fish, crabs, shrimp, and krill. As their beaks are very strong, these penguins are excellent swimmers and can reach speeds of 20 miles an hour.

18. You imagine how much waste tens of thousands of penguins all conglomerating together on one little island can produce and the stench must be overwhelming. For example, the de Leeuw penguins have been going to the same island to nest for hundreds of years and leaving their excrement there ever since. Humans have been harvesting a lot of that for ages, way before chemical fertilizers were invented. It’s part of the reason why the numbers of African penguins have dwindled so rapidly.

19. Magellanic penguin: These penguins are prevalent on the southern coasts of South America but you can sometimes find them on the coast of Brazil. These guys have a distinct difference from African penguins and that is the fact that they hunt jellyfish. These warm-weather penguins got their name from Ferdinand Magellan, who first spotted them in 1519 on his trip to the tip of South America.

20. We know that penguins are flightless birds, but don’t feel too sorry for them. Although they can’t take flight like ordinary birds, many species of penguins can still take to the air. Just before they leap from the water onto the ice, they release air bubbles from their feathers, removing the drag from their bodies and allowing them to launch themselves into the air and land on the ice safely.

21. Macaroni penguin: It’s hard not to fall in love with these penguins right away with their crazy yellow lashes that would make any girl jealous. There are in the region of 24 million macaroni penguins living in 260 colonies between South America, Australia, Antarctica, and the Marian Islands. Despite their numbers being plentiful, they are vulnerable. Their biggest threat currently is a human settlement and huge conservation efforts are currently in place to protect them.

22. Penguins don’t have teeth but have backwards-facing fleshy spines that line their mouths, helping push their dinner down their throats.

23. Southern rockhopper penguins: they look quite similar to the northern rockhopper that we mentioned earlier, but they have a subtle difference. They don’t have the usual patch of pale skin just underneath their beaks. There are roughly a million pairs of breeding rockhoppers. Of all the penguins, this species was not first in the bird song department. They’re the least musical penguins and have a song that can make the most chill person get a little twitchy.

24. Emperor Penguin: Certainly one of the most recognizable penguins is the Emperor penguin. They’re featured in so many excellent animated films, including March of the Penguins, Madagascar, Happy Feet, and Surf’s Up. They are the largest and tallest of all penguins and reside in Antarctica There are around 600,000 adult males in Antarctica currently and there are 54 Emperor colonies in the Antarctic. Some emperor penguins have been known to live for 50 years.

25. Oh, Tago Peninsula is seeing a lot of blues and that’s because they’ve enjoyed a fabulous breeding season of little blue penguins. These tiny penguins have been quite the tourist attraction, with tourists coming every night to watch them scurrying up to the cliff after their day out in the ocean. They’ve seen more than 130 chicks hatch this season, making them the most productive seabird on the planet according to scientist Phil True and long may it continue.

26. The fastest penguin in the world is the Gentoo. These speedy chaps can speed up to 22 miles an hour.

Final words: We hope you have liked the post Interesting Facts About Penguins. You can share this post with your friends and relatives so they can also learn interesting fun facts about penguins.