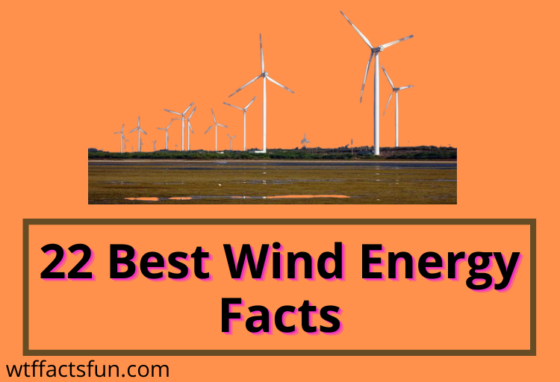 Wind Energy Facts: Friends, today we are going to give you detailed information about wind energy facts in this article. Wind energy is a renewable energy form. This energy is what everyone needs today and in the future. Even when all the resources are exhausted, this wind energy will work and become an important source of energy for the people. Wind energy may seem simple to understand, but it is very important. That’s why we all need to understand this. so that we can take advantage of this energy by using more and more.

1. Electricity is produced by the 15-20 rpm rotation of wind turbine blades. supplying energy to the national grid and powering nearby residences and businesses.

2. A little less than 1 acre of land is required for a wind turbine.

4. With 40% of all wind in Europe, the UK is the windiest nation on the continent.

5. Germany has seven turbines per 100 square kilometers, Denmark has eleven, while the UK has one.

7. One wind turbine produces the same amount of energy as 16, 000 solar panels. It covers the football field at Manchester United four times.

9. Birds face many hazards but wind turbines only cause 0.01% of bird fatalities. Collisions with buildings cause 58% of deaths.

10. Since wind energy is produced cleanly, unlike coal or oil, it doesn’t destroy the environment or require any harmful chemicals. As a result, wind energy helps us use fewer fossil fuels imported from other countries, which enhances our national economy and has numerous other advantages.

11. The cost of delivering wind energy has significantly decreased recently, and as it becomes more popular with the general public, it will only continue to be cheaper. You will eventually recoup the cost of purchasing and installing your wind turbine. Winds are caused by Rota. It is ready and waiting if you reside in a geographical region where there is a lot of wind.

12. Wind energy has low operating costs. Individual wind turbines in wind farms can be expensive to install, but once they are up and running, operational expenses are generally minimal because wind energy is free, and the turbines don’t need much maintenance over their lifetimes.

13. Numerous homes can receive energy from wind turbines, but you are not required to own one in order to benefit from them; instead, you can purchase your power from a company that provides wind energy for a particular region, which means you don’t even need to make a financial investment to enjoy the advantages of wind energy for your home or place of business.

14. Prices are decreasing: prices have decreased by over 80% since 1980 thanks to technological advancements and increased demand. Prices are expected to keep decreasing in the foreseeable future.

15. Landowners who lease space for homesteads can earn a sizable additional income, and wind energy also creates new jobs in this expanding engineering field. Government agencies will also pay you to allow the installation of wind turbines on your property, and in some cases, the electric company may owe you money if you generate more electricity from wind power than you need and it enters the general electric grid, earning you additional money.

16. Modern Technology: Some people find wind turbines very appealing. The newest models are sleek and modern-looking rather than the bulky, rustic windmills of the past, so you won’t have to worry about them being an eyesore on your property. The most recent technological developments have transformed traditional wind turbine designs into incredibly effective energy harvesters.

Turbines come in a variety of sizes for farms, factories, and huge private homes, expanding the market to include many different sorts of enterprises and by individuals for use at home on larger plots of land. The most recent kinds of wind turbines will produce even more electricity, require less maintenance, and operate more safely and silently. They are also available and can power portable, tiny devices.

17. Wind energy has seen rapid growth. According to the U.S. Department of Energy, wind energy has had tremendous growth in the last decade. Cumulative wind power capacity has expanded by an average of 30% per year. Wind energy produces around 2.5% of the world’s electricity. Since wind turbines come in various sizes, a wide range of individuals and organizations can benefit from them by generating electricity for their own needs or selling it to the utility for a profit.

18. Wind power has enormous potential. Other independent study teams have reached the same results, and they are that there is a global potential for wind power of more than 400 terawatts and that wind energy can be harnessed in practically any place.

19. Wind energy has great potential for residential uses; it is especially appealing to the residential market. People are able to generate their own electricity with wind power in very much the same manner as with solar panels In addition to this, photovoltaic wind power is an independent energy source and it’s great for powering homes.

In addition to this, wind-powered homeowners also gain access to something called net metering Net metering basically provides credit to electricity bills for any excess power generated in a given month. Homeowners actually get paid for extra energy production, and that can even protect them from blackouts as well as fluctuating energy prices.

20. Wind turbines are incredibly space-efficient and can be installed on existing farms or agricultural land in rural areas where it can be a source of income for the farmers. When plant owners make payments to farmers for the use of their land for electricity generation, it doesn’t occupy much space and farmers can continue to work on the land.

At present, less than 1.5 percent of contiguous U.S. land area is used by wind power plants. However, if all the planes and cattle land were made available in the interior of the country, there’s a lot of opportunity for expansion if landowners and government land managers are up for it.

Jobs now exist for manufacturing, installation, maintenance, and even wind energy consulting. China is the leader in supplying more than 500,000 of these jobs. With over 150 000 employees, Germany is in second place, while the United States is in a close third with approximately 100 000 wind energy jobs.

What are 3 advantages of wind energy?

Why wind energy is best?

Wind energy is best because its renewable energy.

What are two interesting facts about wind energy?

1219 households are powered by 1 wind turbine. One wind turbine produces the same amount of energy as 16, 000 solar panels.

Final words: We hope you liked the article on wind energy facts. You can share this post with your friends and relatives so they can also learn about wind energy.