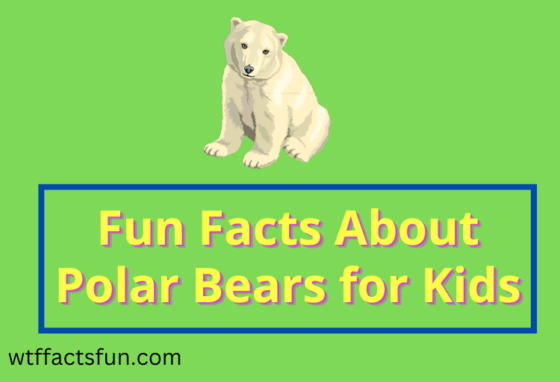 Fun Facts About Polar Bears for Kids: In this article, you will learn about polar bear facts, polar bear adaptation facts, and polar bear habitats for kids. These are fascinating facts that most children are unaware of. The term “white bear” has also been used to describe polar bears. The Arctic Ocean, its surrounding waters, and nearby land masses are all included in the polar bear’s usual habitat, which is primarily contained within the Arctic Circle. It is both the largest extant terrestrial carnivore and the largest extant bear species.

1. The polar bear is hypercarnivorous

The polar bear is hypercarnivorous. An animal is considered a hypercarnivore if more than 70% of its diet consists of meat, either from aggressive predation or scavenging. The remaining portion of the vegetarian diet could be made up of non-animal items like fungus, fruits, or other plant matter.

Male polar bears reach an adult weight of 350–700 kg and a total length of 2.4–3 metres. Mature males, however, are said to weigh an average of 450 kg in the Beaufort Sea. Adult females typically weigh between 150 and 250 kg and are between 1.8 and 2.4 metres long, making them nearly half the size of adult males.

Polar bears frequently rely on their fat reserves when there is no sea ice to support their preferred diet of seals. Polar bears are regarded as marine mammals due to their need for sea ice.

A jaw bone dating from 130,000 to 110,000 years ago was discovered on Prince Charles Foreland in 2004 and is the oldest polar bear fossil known. Fossils demonstrate that the polar bear’s molar teeth diverged greatly from the brown bear’s between 10,000 and 20,000 years ago.

Due to the fact that it spends a large portion of the year at sea, the polar bear is a marine mammal. It is the only extant marine animal with strong, broad limbs and feet, which enable them to run and walk for long distances on land. The annual sea ice that covers the waters above the continental shelf and the Arctic inter-island archipelagos is its favoured habitat.

The hide and fur of polar bears, along with up to 10 cm of adipose tissue, provide them with excellent insulation. The outer layer of guard hairs, which appear white to tan but are actually transparent, is covered by a layer of thick underfur.

7. A polar bear’s sense of smell

The polar bear has an exceptionally developed sense of smell, as evidenced by the fact that it can find seals buried in snow three feet deep and approximately 1.6 kilometres away. Its vision is also good at a great distance, and its hearing is comparable to that of a human.

The polar bear is a skilled swimmer who frequently swims for days at a time. To reach ice far from land, one bear swam continuously for nine days in the chilly Bering Sea across a distance of 700 km. She then travelled another 1,800 kilometres. The bear lost 22 per cent of her body mass while swimming.

Polar bears don’t have limitations. Despite having a reputation for being viciously violent, they are often cautious in confrontations and frequently opt to flee rather than engage in combat. Polar bears rarely attack people while they are full unless they are very agitated.

Rarely do polar bears survive longer than 25 years. The oldest known wild bear passed away at 32 years old, while the oldest known captive bear died in 1991 at the age of 43.

The development of oil and gas in polar bear habitats may have a number of effects on the bears. The regions where polar bears and their prey are also concentrated, such as sea ice leads, are where an oil spill in the Arctic would most likely concentrate. Polar bears are at risk of dying from hypothermia due to oil spills since they partially rely on their fur for insulation, and oil contamination of the fur diminishes the fur’s insulative value.

The polar bear is considered a vulnerable species due to the anticipated habitat loss brought on by climate change. Large-scale hunting caused widespread concern for the species’ existence for decades, but as limits and quotas went into action, population levels started to increase again.

What is a polar bear fact for kids?

What are baby polar bears called?

How often do polar bears poop?

We hope you liked our post, “Fun Facts About Polar Bears for Kids.” You can share this post with your friends and relatives so they can also learn something new from it.

Top 15 Facts About Amphibians for Kids

Top 20 Facts for Kids About Earth