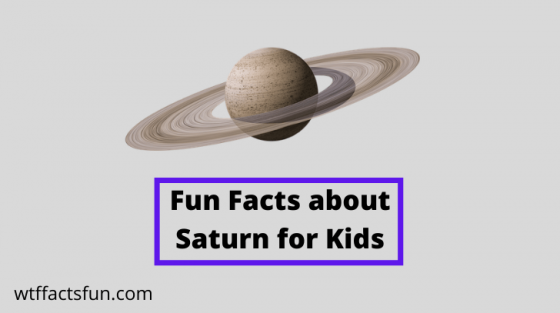 Fun Facts about Saturn for Kids

Fun facts about Saturn for kids: In this article we are going to tell you about a planet that has been attracting everyone for a long time. This planet is Saturn, due to the ring around this planet, It seems to be the most beautiful of all other planets. We will elaborate on some unheard fun facts about this gas-filled cold planet. The kids will love to know about Saturn and they will learn a lot.

1. Saturn was first discovered by Galileo in 1610.

6. Winds at Saturn are the second fastest after Neptune. It winds at a speed of 500m/s.

7. It is 120 million kilometers away from the earth.

8. It is the fifth brightest planet of the night. It can also be seen without a telescope.

9. Saturn is the second-largest planet in the solar system. Its diameter is nine times larger than earth.

11. Saturn was named after the agriculture god of Roman.

12. Saturn is larger than the earth but its density is eight times less than earth.

13. If Saturn planet can be kept on water, it will float on water. This is because its density is less than the water.

14. The planet Saturn is made of gas so that it is impossible to stand on top of it.

15. The Saturn planet is made up of hydrogen and helium gas, out of which 96% is hydrogen.

16. This planet has 62 moons which come second after the planet Jupiter.

17. Saturn’s moon Titan is bigger than the mercury planet.

18. The brightest moon of Saturn is Enceladus. It completely reflects the sunlight that falls on it because it is made up of white snow. Its temperature is -200° C.

19. Titan is very similar to the earth because it has surfaces, rivers, and mountains like the earth. Due to this satellites have been sent to it. It has a stock of methane gas.

21. Four spacecraft have been sent to Saturn so far. It is pioneer 11, voyager 1, voyager 2, Cassini- Huygens.

We hope you have liked the post fun facts about Saturn for kids. You can share this article with your friends and relatives. You can also comment down below.