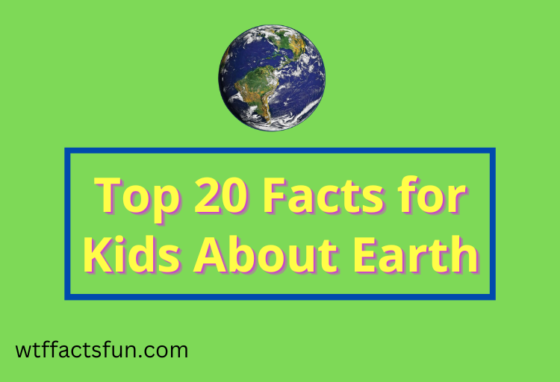 Facts for Kids About Earth

Facts for Kids About Earth: In this article, you will get to know the facts about earth. You must have never heard these facts before today. This will further increase your knowledge about the earth. Our earth is full of mysteries due to this our desire to know about the earth always remains.

1. It’s possible that Earth once had two moons

It’s conceivable (though unproven) that Earth formerly possessed a second moon with a diameter of 750 miles. This theory’s proponents speculate that this little moon may have collided with another one.

By dating the planet’s oldest rocks and recently found meteorites, scientists can determine how old the Earth is. The age of the Earth is 4.54 billion years.

It is the largest island in the world that is not a continent in and of itself and is roughly one-fourth the size of Australia.

4. Earth moves around the Sun

5. The Largest Rainforest on Earth

More than 30 million people and one in ten species known to exist on Earth call the world’s largest rainforest, the South American Amazon, home.

6. A waistline exists on the planet

Extra earth and water masses are pulled by gravity into a bulge, or “spare tyre,” that circles our planet. The circumference of the earth is 24,901 miles at the equator 40,075 kilometres.

7. 90% of the freshwater on Earth is frozen solid

In Antarctica, there is that freshwater. Because it is trapped inside polar ice sheets that are frozen, about 90% of it isn’t really water at all.

8. The Biggest Earthquake on Earth

9. Africa is home to the largest scorching desert on earth

The Sahara is the biggest, hottest desert on Earth.

It’s not difficult to comprehend that 60 per cent of the world’s population resides in Asia, which is home to more than 40 nations, some of which are among the most populous worldwide.

It may come as no surprise that Antarctica is the coldest region on Earth, but the level of iciness there is almost astounding. There, wintertime lows can reach minus 100 degrees Fahrenheit.

12. The Dead Sea is where the ground level is the lowest

The lake known as the Dead Sea, which is situated between Jordan, Israel, and the West Bank, is 1,400 feet below sea level.

Our globe’s mass is dispersed unevenly since it is not a perfect sphere. Unequal mass also results in somewhat uneven gravity. There is a puzzling gravitational anomaly in Canada’s Hudson Bay. Compared to other places, this one has a lower gravity.

14. About 93 million miles separate Earth from the sun

The distance between the Earth and the sun is roughly 93 million kilometres. Sunlight travels to Earth from this distance in around 8 minutes and 19 seconds.

Geophysicists are confident that the ocean of hot, liquid metal that swirls around Earth’s solid iron core is the reason for its magnetic field. This liquid movement produces electric currents, and these currents in turn produce the magnetic field. The magnetic north pole of Earth has been moving northward by more than 600 miles since the early 19th century.

16. A fungus is the largest living creature on Earth

This fungus also called the honey mushroom or Armillaria covers 2,200 acres in Oregon.

17. Everest Has Been Climbed Without Oxygen

Climbers Reinhold Messner and Peter Habeler were the first to conquer Everest without using oxygen on May 8, 1978.

18. The biggest tree on Earth

General Sherman is a big sequoia that is more than two thousand years old and is 52,500 feet in volume in California’s Sequoia National Park.

19. The Deepest Spot Is The Mariana Trench

20. Mountains Were Created By Shifting Rock

Although we are unable to see the tectonic plates, which are movable rock slabs, some of their consequences are enormous. Consider the Himalayas, which span 2,900 km between India and Tibet. Between 40 million and 50 million years ago, when India and Eurasia met as a result of plate movement, this enormous mountain range first appeared. The sharp Himalayan peaks were created by a tectonic collision.

What are 5 facts about Earth for kids?

Earth is the only planet that supports life; it is the third planet in the solar system; it revolves around the sun; it is also known as the blue planet, and one day on earth is 23.9 hours long.

What is Earth information for kids?

90% of the freshwater on Earth is frozen solid.

What is Earth for grade 1?

Earth is one of the planets in our solar system. It revolves around the sun.

We hope you liked the post, “Facts for Kids About Earth.” You can share this post with your friends and relatives so they can learn about these interesting Earth facts.