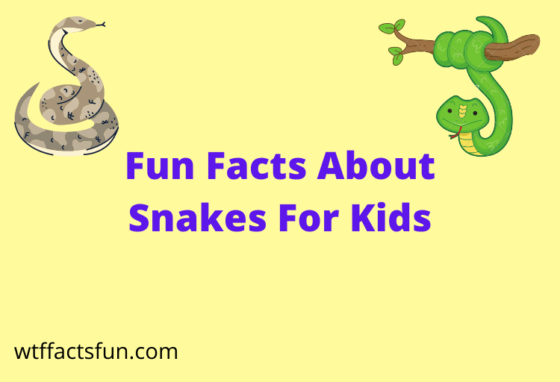 Fun Facts About Snakes for Kids

Fun Facts About Snakes for Kids: Friends, today we have come up with some unique fun facts about snakes for kids. Many people get scared as soon as they hear the name of the snake. This is because such an image has been created for the snake in their mind after watching movies like Anaconda. Snakes are very shy creatures, they do not harm anyone without any reason. When they feel any danger themselves then only they attack. We are going to tell you about similar unheard fun facts that kids will enjoy.

1. Snakes are found almost everywhere in the world, but snakes are not found in Antarctica because that place is not suitable for snakes to live.

2. The snakes are as old as a Dinosaur, they have been living on earth for thousands of years.

3. Snakes have neither feet nor ears.

4. Snakes use their tongue to smell anything. That’s why you may have seen them moving their tongues many times.

5. More than 3500 species of snakes are found all over the world, this species is second only to the lizard reptile.

6. About 70 species of snakes also live in the sea. These are known as sea snakes.

7. Snakes sleep with their eyes open. It seems because they do not have eyelashes.

8. King cobra snake is the most poisonous snake in the world. This snake is found in India.

9. Snakes are called cold-blooded animals. This is because snakes cannot control their body temperature according to themselves. The temperature of the snake’s body depends on an external source. They keep their body warm with the sunlight.

10. The rainforest is one of the largest habitats of snakes. This is the reason many snakes are found in the Amazon rainforest jungle.

12. Rattlesnakes are snakes that have a rattle in their tail. It rattles before it attacks its prey.

13. The highest altitude snake in the world is named Himalayan Pit Viper. It lives in the Himalayan region at an altitude of 4000 meters.

14. The black mamba is also one of the most poisonous snakes. The inside of the snake’s mouth is completely black. So, it is called Black Mamba.

15. A species of snake also flies. For this reason, it is also known as a flying snake. This snake goes high on the tree and glides from one tree to another. For this, it uses the muscles of its body.

16. Only 600 species of snakes are poisonous of all the species.

18. A snake can eat an animal twice the size of its head. This is because the snake’s jaw is very flexible. It helps in swallowing prey.

19. Snakes never chew food, they swallow food. Sometimes snakes swallow such a big prey that they burst their stomach and they die.

We hope you have liked the fun facts about snakes written by us. Most snakes in the world are killed for the sale of skins, which is unfortunate. We should try to stop it.

21 Fun Facts About Ducks For Preschoolers

17 Fun Facts About Ladybugs to Amaze Your Friends

25 Fun Facts About Snails for Kids