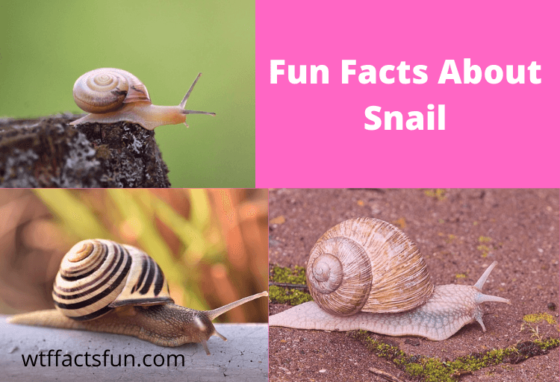 Fun Facts About Snails: Today we are going to tell you some fun facts about snails. It is the world’s lowest-speed organism. You must have seen snail. The shell made on their back makes them rare to see. After seeing them in everyone’s mind, there is a desire to know about them in more detail. In this article, you will learn some interesting fun facts about snails. This information will be very beneficial for the kids.

1. Snail has no backbone.

3. The shell on the back of the snail grows with age. So the age of the snail can be identified from the shell.

4. The snail has both male and female reproductive organs. But still, they need another snail to produce eggs.

5. It takes 5 to 10 hours for the snail to attract another snail for breeding.

6. There are three types of snails, some of which live in the ground, some in freshwater, and some in the sea.

8. Although snails eat all over the world, in France ground snails are eat with great fervor. It is known as escargot there and it is also considered to help digest food.

9. The snail leaves mucus while walking. This protects it from friction in walking.

11. Conch is a musical instrument is also a type of snail.

12. Snails are more active at night than on the day.

13. Snails found in humid areas have hairs in their shells.

14. Whenever the snail feels fear, it hides in its shell.

Fun Facts About Snails and Slugs for Preschoolers

18. The shell of the snail is made of calcium carbonate.

19. In winter, snails cover themselves with mucus and keep themselves safe.

21. The snail which does not have a shell in its back is called a slug.

22. Snail eats his food without chewing.

23. Earlier people in Columbia considered snails to be a symbol of joy.

24. Snails also eat the eggs of another snail.

25. Snails living in the ground eat flowers and leaves. Ground snails are vegetarian.

We hope you liked the fun facts about snails for preschoolers. You can give your feedback in below comment section.

32 Best New Jersey Facts for Kids that no body knows